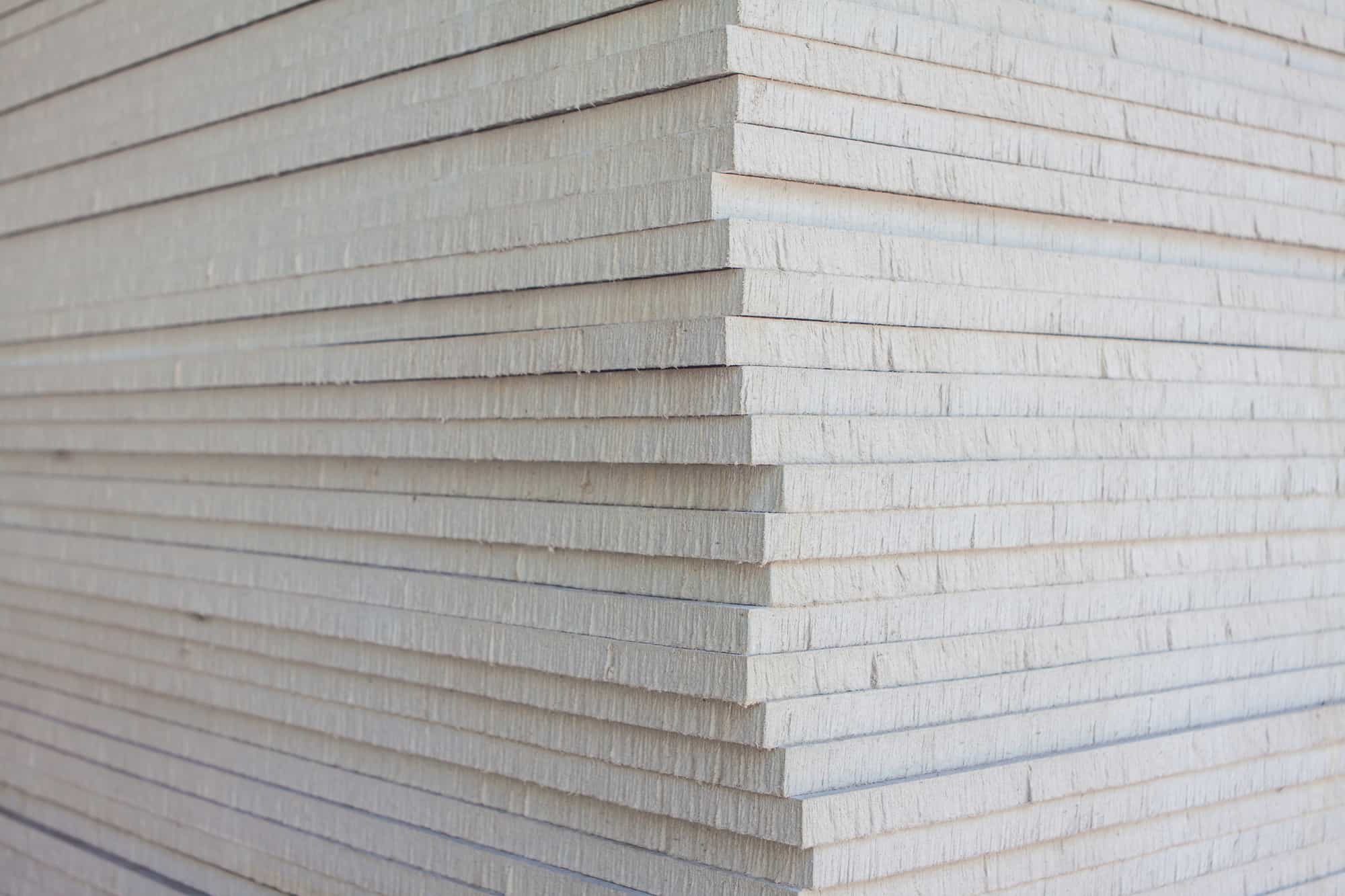 Few products have transformed the construction industry as much as drywall. It is affordable, non-combustible, and installs quickly, reducing construction time and cost significantly. But when and how was this revolutionary product invented?

As we know it today, drywall was created in 1916 under the name Sheetrock by the United States Gypsum Company (USGC). However, the prototype of drywall was invented way earlier in 1894 by Augustine Sackett and consequently called the Sackett board. (Source: National Inventors Hall of Fame)

As you can see, the invention and development of drywall is not as simple as saying which year it was invented. Like most things, it has been a continuous process that involves more than one party. Read on to learn more about the history of drywall.

When Was Drywall Invented?

Drywall in its current condition was invented in 1916 by the USGC, which was formed 14 years prior. The product was created to protect homes from urban fires and as a poor man’s solution to the more costly plaster walls.

However, drywall was already in existence by the time USGC improved and started selling it to the public. A company named Sackett Plaster Board was already manufacturing drywall from 1894 before USGC acquired it, among other companies.

This company was formed by the original inventors of drywall Augustine Sackett and Fred Kane.

The drywall Sackett and Kent invented in 1894 may not be exactly the same as today’s, but it served the same purpose: to provide a faster, cheaper, and more fire-resistant alternative to plaster.

Who Invented Drywall? Was It A Person or a Company?

Drywall was first invented by Augustine Sackett and his university mate Fred Kane in the 1880s. The two came up with the idea to create a wallboard made of straw, tar, and felt paper. They also developed a machine to manufacture the wallboard that same year. (Source: InspectApedia)

In 1888, Sackett and Kent improved their wallboard and called it the Sackett board. It was made by layering gypsum plaster within four plies of wool felt paper with open edges.

Sackett’s invention shaved weeks off the construction time required to finish a building, but it had some drawbacks. The formulation of Sackett boards was improved more in 1910 by first eliminating two layers of felt paper in favor of paper-based facings and then sealing the edges.

This Sackett board was soft enough to admit nails and tough enough not to cave in during the installation or the life of the building.

For the time being, it was a fantastic replacement for the time-consuming and labor-intensive method of making wet plaster walls because you could erect the walls in a day.

In 1901, the USGC was formed, acquiring 30 subsidiaries in the construction industry, including Sackett Plaster Board Company. The company first started selling drywall in the form of small, fire-resistant tiles before they increased the size to speed up the layering process.

A few years later, in 1917, the USGC introduced their version of drywall by the brand name Sheetrock. It is the same product Sackett Plaster Board invented years earlier, but with better fire resistance, sound-proofing, and mold-resistant properties. (Source: United States Gypsum Company)

Why Is It Called Drywall?

The name drywall is derived from the fact that structures made of this product are installed without water. The issue with plaster and lath was the extremely long drying period because it was installed wet, so builders had to wait weeks for the first layer to dry before installing another one.

Drywall is made of gypsum, a mineral that looks like white sand though it can also be pink, yellow, or gray.

Contrary to popular belief, though, there’s tons of water in gypsum, but it’s in crystalline form. This is why drywall particles look dry, and it’s also what gives drywall fire-resistance capabilities. (Source: How Stuff Works)

To make drywall, gypsum is mined and transported to manufacturing factories. It is mixed with other additives like starch, thickening agent, and paper pulp and blended to make a thick paste.

The manufacturers spread the paste onto Manila paper and lay another paper on top. This entire formation goes into an oven to heat up to 500°F (260°C).

However, drywall is a name only used in the US and countries that speak American English. In the United Kingdom and Australia, it is known as plasterboard or Gyproc. Many people also know drywall as gypsum board, wall panels, wallboard, and Sheetrock.

When Was Drywall First Used?

Consumers first used the USGC version of drywall in 1917 under the brand name Sheetrock. It was during World War I, which meant the U.S. troops needed urgent housing both in the US and overseas. (Source: Did You Know Homes)

Different materials, including wood and straw, were used to meet the demand until a fire broke out in the barracks, taking the lives of many service members and destroying the much-needed houses.

Gypsum board, or what we call drywall today, became the obvious solution to that problem because it’s fast to build and naturally fire-resistant.

Outside the military, Sheetrock was seen as a poor man’s answer to plaster walls. In fact, people overlooked the product so much that USGC had to start advertising it as a ‘fireproof wall in which no time is lost prepping the materials or waiting for the structure to dry.’

Many thought of drywall as a substandard building material, and it didn’t enjoy the widespread use we see today until years later, 25 years to be exact.

When Did Drywall Become Commonly Used in Houses?

In 1941 when the US joined World War II, the country’s labor force started focusing on manufacturing for war, using cheaper materials to offset the war costs and labor storage.

Plastering became a costly building option because of a shortage of labor and money, and people began to use drywall instead. (Source: IPWatchdog)

Drywall became the go-to construction plan for domestic, commercial, and military purposes from the 1940s onwards. In fact, it was considered patriotic to use drywall because you would spend less time and money and allow extra resources to support the war efforts.

By the time the war ended in 1945, drywall had become the dominant building material across the country and outside.

But World War II wasn’t the only catalyst for the widespread use of drywall. The baby boom of 1946 to 1960 also caused sales to go up rapidly. The country had just settled back from war and reportedly started having babies.

This caused more than 21 million new houses to be built in a very short period, and drywall was the best option. It was cheap and durable, and constructing it took one-tenth of the time it took to build with plaster.

Once the baby boom settled, the country embarked on economic growth, and commercial construction was a big part of that.

The demand for high-rise buildings and industries saw the increased use of drywall as well as the innovation of movable partitions systems, improved drywall, and gypsum board shaft wall systems.

What Was Used Before Drywall?

Before drywall became popular in the 1940s, people used lath and plaster. They horizontally nailed narrow strips of wood, also known as laths, across the joists or wall studs and then coated the structure with three layers of plaster, providing unrivaled structural integrity. (Source: The Spruce)

For the process to work, walls and ceilings were built using either wood or metal strips underneath the lath. The laths, which were usually one inch thick and four feet long (2.54cm thick and 1.22m long), were then tacked in place at the studs, spacing them about half an inch (1.27cm) apart.

Once the laths were in place, a scratch coat of plaster was applied directly to the laths, making a base foundation to build on. The second layer of plaster was a brown coat, and then a third layer was placed on top, which is where you would apply the paint.

Sometimes, additional ingredients, like horsehair, were added to the plaster to strengthen and prevent chunks of plaster from breaking away once the building settled.

Plaster and lath have been around for millennia. Ancient Egyptians are said to have been using gypsum in construction as early as 3700 B.C. They would burn gypsums in open-air fires to make plaster and apply it over woven straw lath.

Powdered lime, sand, and fibers were the traditional ingredients used to make plaster. This combination provided distinct benefits such as:

When Did Drywall Replace Plaster?

Plaster took a hit in favor of drywall in the 1950s after World War II and never recovered after that. Even though lath and plaster had a lot of benefits and character, there was a higher need for cheaper and faster construction methods. (Source: Bauerle Roofing)

To put it into context, a typical drywall job will cost you between $1-3 per square foot (0.09 square meter), all things included.

On the other hand, a plastering job will take you back about $10 per square foot, according to Home Advisor. The time spent and the need for skilled workers also work against the plaster.

That said, the cost is only a small part of why drywall replaced plaster in construction. Plaster and lath had other notable disadvantages that came to be solved by drywall, including:

However, the technique has not completely died. Plaster and lath are still in strong demand, especially in renovation and conservation work. Story buildings also use the method to construct staircases because it’s a stronger option than drywall, and it’s also more resistant to water damage.

When Were Drywall Screws Invented?

Drywall screws were invented in 1950. Although Archimedes is known as the inventor of screws, Illinois fire-protection engineer Paul Quigg and his U.S. Gypsum Corp co-workers invented or perfected the drywall screw in 1950. (Source: JacAnswers)

The screw revolutionized how drywall is installed on wood or metal framing by making the process easier, durable, and safe. The way the screw is designed was meant to minimize dimpling on the face of the wall because it goes inside the drywall completely and then seals itself close.

It has a countersunk head which means the entire screw lies flush with the surface of the dry board, creating a smooth and even finish.

This is very different from traditional nails that leave small holes in the drywall and even come loose over time. In contract, drywall screws grip both the drywall and the frame tightly, providing a more secure and long-lasting installation that will last decades.

The countersunk head also keeps the drywall screw from breaking the paper, a problem that’s very common with nails and other screws. Breaking the paper around the head of the screw is a serious concern when installing drywall.

A paper that breaks or becomes loose is called a popper, and too many poppers on one piece of drywall can mean the structure is not properly or safely attached to the supports. (Source: Google Patents)

The invention of drywall screws was also part of drywall getting accepted by people in the 1950s. It alleviated the worry that heavy drywall pieces could come loose and fall on people if not properly installed.

All in all, drywall has come a mighty long way since its invention in 1894. Today, you can buy drywall sheets in almost any size you want, making it an excellent choice for all kinds of construction.